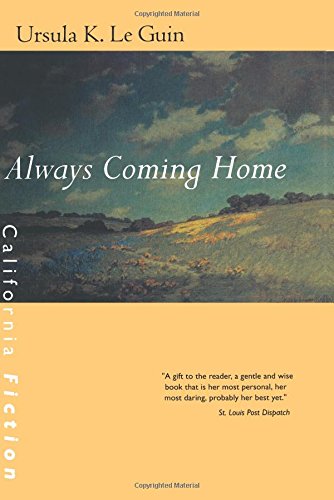 This work by Ursula K. Le Guin notably differs from most of the fantasy and science fiction novels that have deservedly made her a legend.

Insane masterful in-depth worldbuilding, seems to be the thing here! Always Coming Home is an immersive exploration of a fictional culture; “a liberal utopian vision” exquisitely rendered. I’ve only read a sliver of her oeuvre but it’s clear she’s a master at envisioning creative and generously humanist possibilities for alternate ways of existing on a societal level.

This book is driven less by a linear narrative, and more by the intricately woven culture and history of the people it’s about. It is “a novel unlike any ever written…interweaving of story and fable, poem, artwork and music…” A quick look at the table of contents reveals an awesome array of textual material: songs, charts, stories, poems, tales, histories, texts, dramatic works, maps… And, wow, does this book have some cool credits! Composer, artist, geomancer! And maps drawn by the author herself. It’s clear right away this is special; no ordinary novel.

It also contains an extensive “the back of the book” section with appendices on every imaginable facet of this fictional culture, from food to lodging, musical instruments to maps, play to medical practice, notes on narrative modes, details on alphabet and writing system. The complexity of mythology and diversity of forms is astounding; with so much wildly creative material it’s impossible to choose just one or two examples out of the dozens collected here.