Cataloging the World: Paul Otlet and the Birth of the Information Age 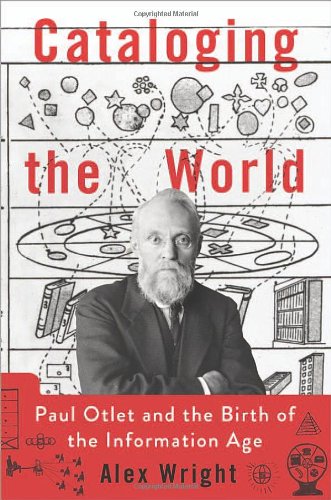 This looks like a really fun story of someone who, while not widely recognized as a pioneering information theorist or superstar technologist, contributed tremendously to how we organize knowledge and information. It’s about the quest of a librarian, Paul Otlet, to capture and organize the world’s knowledge using card catalogues. It promises a lot of visionary technological implications and prescient imaginings—and some awesome insight into the history of libraries and hierarchical systems for cataloging and storing information.

As a side note—I’m currently using the “Otlet’s Shelf” Tumblr theme to create an online (and infinite-scrolling) shelf of my favorite books, and were it not for this small homage I may never have heard of Paul Otlet. But it sounds like we have a lot to thank him for!

Otlet started with a mission to expand the potential of library card catalogs, but soon moved to even greater ambitions, with his dream of building the Mundaneum, an imagined “mechanical collective brain” that never got built during his lifetime but presaged the Internet.

Eight reviews, all five stars, call the book ”fascinating”, “compelling and insightful”, and “a stunning portrait”…it seems to be great not only because of its compelling subject matter, but also due to how clear and engaging Alex Wright’s writing is in telling Otlet’s story.

Chapter titles include Libraries and Labyrinths, an Intergalactic Network and a Collective Brain. One particularly intriguing one is entitled “The Microphotic Book”—an obscure term that only turns up results related to Otlet. Apparently it describes Otlet’s idea for a system of microfiche books colocated with his massive card catalog to form an “integrated information storage and retrieval system”. Awesome stuff!