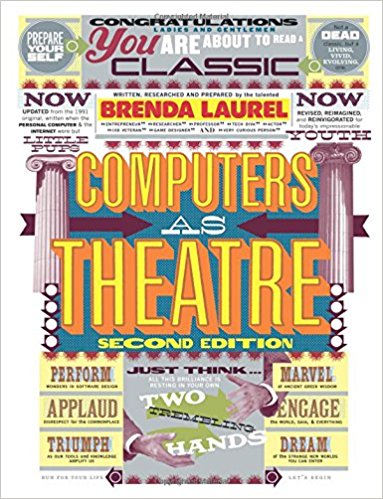 In this classic in the field of “human computer interaction”, Laurel explores how our interactions with technological interfaces are akin to theater. Her chief insight: “that effective interface design, like effective drama, must engage the user directly in an experience involving both thought and emotion.”

This is a new edition of a book that, as Don Norman says in the foreword, was ahead of its time. It’s a foundational, multidisciplinary treatment of principles critical to how we live and interact with each other in and amongst technology, and it holds far-reaching implications, for computing systems not just as interfaces but as platforms.

What does the concept of interaction, as investigated here, really mean? It requires thinking in terms of elements like dynamics, change, and transitions; models and metaphors.

The book looks at a range of interesting topics: dramatic interactions and design heuristics, representational worlds, dramatic interaction, pattern, language, thought, and emotional navigation. It contains all sorts of examples and ideas, touching on “new frontiers, including augmented reality, distributed and participatory sensing, interactive public installations and venues, and design for emergence”

This sounds both intellectually fascinating, and highly relevant to interactions we engage in daily. A book exploring the intersection of technology, narrative, and experience can’t help but pique my antilibrarian sixth sense.