The Control of Nature 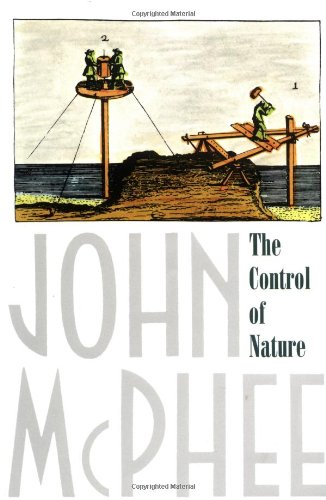 I’ve read a few of McPhee’s essays and stories, particularly those in which he talks about writing itself, and his process. I haven’t read much of the longer journalistic/reportage work for which he’s most well known, but in all I have read, his voice comes through with such clarity, cogency, and wisdom.

This book is an “engineering thriller”, an “account of places where people are locked in combat with nature.” McPhee writes a lot about geology, about topics that are massive and slow and beautiful. Things large and complex in scale—but somehow he distills them down into human stories, eminently compelling. From a review: “Most striking is his depiction of the main contestants: nature in complex and awesome guises, and those attempting to wrest control from — stubborn, sometimes foolhardy, more often ingenious, and always arresting characters.”

I like to read good writing on writing, and I was turned onto McPhee’s writing on writing by James Somers, who writes about McPhee’s “Draft #4”, about his (McPhee’s) writing process, in his (Somers’) essay about the magic of Webster’s dictionary. I’m not sure how much this relates to The Control of Nature—but both essays (McPhee’s and Somers’) are great, and I wanted to link to them.

Anyway, looking inside the book at hand, I’m surprised to see it’s just three long pieces—somehow I was expecting more stories or chapters—but I’m sure there’s incredible depth in each of these three. I almost don’t want to read too much about what the three chapters/stories actually are about, because I feel like the summaries will inevitably come across as less interesting than the stories themselves, fail to capture the intricacies and humanity.

All I really need to know is that it’s about humans vs. nature, a classic struggle, and it’s written by a man who works wonders with words. Another reviewer: “McPhee’s books are always crisp, well-written, informative, authoritative, entertaining, and balanced…” Well. I’ll just have to read more of them!