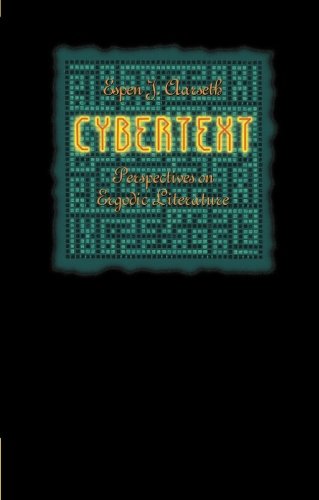 This book is nearly two decades old, and seems to be one of the pioneering texts in the new field of study that arose with the intersection of networked technology and more traditional literary studies. Its topic first appears rather arcane and complex, but the overall description is actually pretty simple: this is a book about “the aesthetics and textual dynamics of digital literature.”

It starts with some intrigue and esoterica right in the title: “cybertext” is a term that Aarseth tells us right on page one of the introduction is derived from Norbert Wiener’s landmark book Cybernetics (in fact also in my antilibrary!) about systems containing information feedback loops, and here refers to a certain organization of a text, and exchange with its reader —

Let me pause to quote the following sentence: “During the cybertextual process, the user will have effected a semiotic sequence…” Now, doesn’t that feel somehow rather vividly pornographic? Maybe it’s just me. Anyway, back to definitions…

— and the second strange titular word, “ergodic”, which Aarseth tells us is originally from physics, here refers to literature in which “nontrivial effort is required to allow the reader to traverse the text.”

I took a course on digital literature in college, and it was really interesting stuff — computer games, hypertext, interactive fiction, computer-generated poetry, and various experiments involving networks and generative writing and links and nonlinearity and code. I remember the focus of that course being more on primary texts (actual examples of digital literature) and a bit lighter on the theoretical readings, but this looks like one of the best I’ve seen on the topic.

I like the focus here on the reader, and the actions, the interaction, that “ergodic literature” relies on. It shifts the relationships between reader and writer, and the experience of reading in particular, to be more dynamic and engaged. One sentence I really like, also from the introduction: “A cybertext is a machine for the production of variety of expression”. This starts to get at a lot of fascinating questions about ambiguity and potentiality and more — too much to get into at the moment, but quite a lot to think about here!

This seems like the kind of book that, were I approaching it with no prior knowledge or vocabulary relating to its topics, I might appraise as dense and dry — but having nurtured an interest in this area (and briefly studied digital lit) it actually seems an appealing challenge! Though I can’t say I’m as jumping-up-and-down excited to read this as I am to read certain other, non-academic works, I can say I’m definitely not as intimidated as I once would have been.