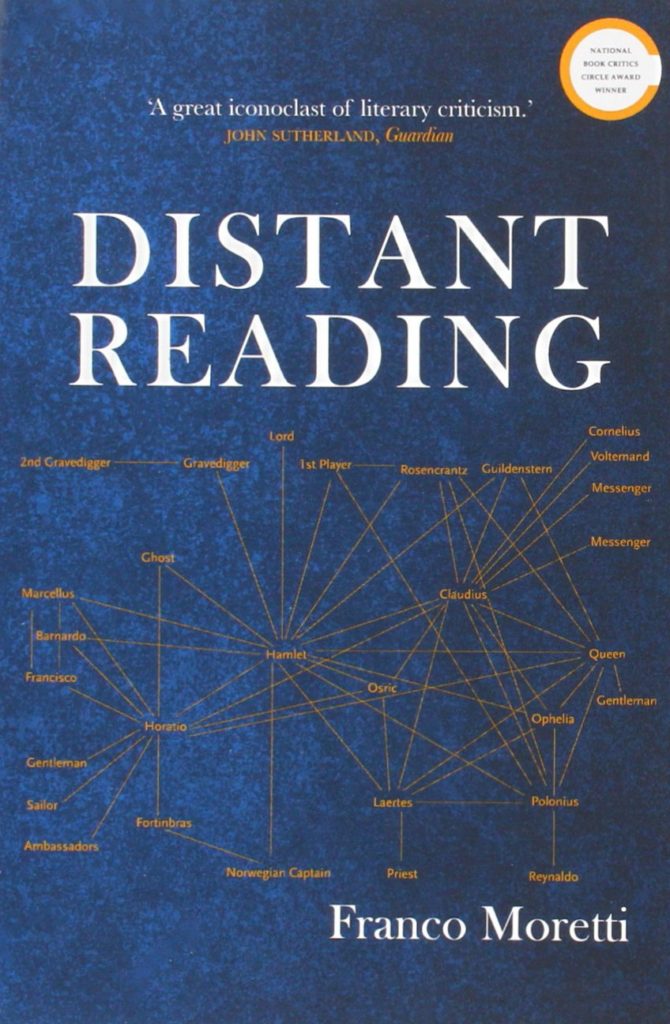 This is literary criticism, of a sort—but not your traditional sort. It’s about taking a kind of big-data approach to analyzing literature, focusing on words and texts from a completely different perspective than the sort of reading we’re used to. It combines digital humanities with quantitative research with network theory. Cool!

Now, I’m not convinced this is really necessarily a fruitful way to approach a text in “literary” terms—I don’t think it will always give valuable insights about style, meaning, etc.—but I think it’s interesting in how it focuses the lens of data and analytics on an area not typically prone to that sort of probing.

Moretti, the single cover quote informs us, is “a great iconoclast of literary criticism.” A literary scholar and a data scientist! He seems to want us to know that his approach is somehow different, new, experimental.

Looking at the chapter titles, I don’t get a great sense for much cohesive structure to this book—there are chapters about European literature, world literature; Hollywood, evolution, the novel, conjectures, network theory and more. It’s not clear how they fit together, but it turns out that’s because they’re not really chapters, they’re a collection of essays molded together into a book. Apparently it “follows two decades of conceptual development”, which may explain the topical jumps.

One cool thing: it confronts many of the issues raised by the idea of the antilibrary itself: the overwhelming size of the potential canon, the vast majority of books every critic must leave unread, the impossibility of one person making a discernible dent in the collected creation and knowledge of humanity.

Distant reading is a possible solution to these issues; Moretti proposes that “distance…allows you to focus on units that are much smaller or much larger than the text”, and this lets you discover things that the normal book-by-book reading process isn’t well-suited for, like discerning large-scale trends and structures within an entire corpus of literary works. I like the monumental scale at play here; the traces of evolution and mapping recall meditations on the ever-vast and lovely notion of “deep time”.

Learn more about this book on Amazon.