An Experiment with Time (Studies in Consciousness) 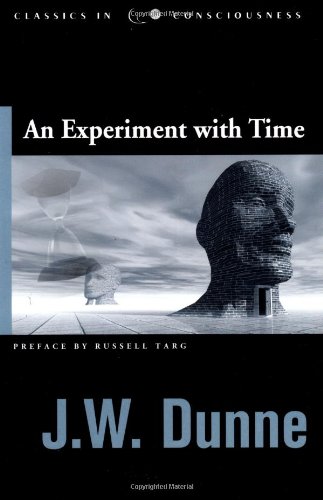 Okay: anyone reporting on “experiments with time” — in what looks to be a provocative and engaging way, no less — has my attention.

This book, published in 1927 by a British aeronautical engineer, seems to be about “how our consciousness transcends our ordinary understanding of both time and space”. It presents “a new model of multidimensional time” precipitated by “a series of strange, troubling precognitive dreams” — it’s conclusion is nothing less than a completely new way of thinking about time.

If true, this theory “accounts for many of life’s mysteries: the nature and purpose of dreams, how prophecy works, the immortality of the soul” and more, and would indeed be “a milestone in precognition research”.

It’s part of the “Classics in Consciousness” series (whatever that is!) and is a fairly short book, with just a few main sections: Definitions, The Puzzle, The Experiment, Temporal Endurance and Temporal Flow, Serial Time, and Replies to Critics. The fourth and fifth seem mysterious and I’m curious to know what the hell they’re about!

Just looking at the preface, this book contains: talk of parapsychological research and “precognitive dreams”, of “the future affecting the past”…”retro-causality”, ESP, “quantum-interconnectedness” (entanglement), the idea of an undivided, holographic universe… Apparently “serial time” is a theory “in which our consciousness has access to time’s many dimensions”. My head is starting to spin.

I can’t help but be dubious of Dunne’s conclusions, but am nonetheless duly intrigued. To at least one reviewer it’s “one of the most important books of the last century”, even if to another it is “insightful yet flawed”. But these conclusions, supposedly “based in deductive reasoning and experiments” as they are, indicate that the book is definitely not your average crackpot theory. At least worth a closer look!