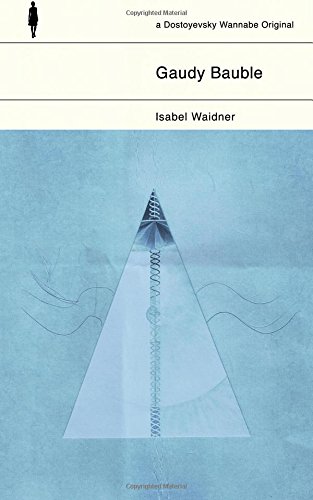 This book sounds delightfully bonkers, fairly abstruse, and difficult to review. From reading other reviews, I get the sense immediately that this book provokes strong opinions, and perhaps a good deal of confusion as well.

One brief overview that takes me not-terribly-closer to understanding what it’s about describes the novel(la?) as “a glittering world populated by Gilbert & George-like lesbians, GoldSeXUal StatuEttes, anti-drag kings, maverick detectives, a transgender army equipped with question-mark-shaped helmets, and pets who have dyke written all over them. Everyone interferes with the plot. No one is in control of the plot. Surprises happen as a matter of course…”

It’s a book where plot seems secondary; not that it’s devoid of plot, but that the plot isn’t the driving forcem really. It’s centered around a mystery or investigation of some sort, and saturated with themes of queerness and identity, and is generally  “bewildering and disorienting…” This is another book that has inspired a lot of very in-depth reviews, many to some degree ambivalent, but most clearly impressed with the writerly feat on display.

One review indicates almost a quantum instability in the impression it leaves: “I had a strong reaction, but I’m not sure if it’s positive or negative. I initially didn’t give any stars, but Apatt thought that equated to zero. So I’m giving 3*, but please note my actual rating is anywhere between 1* and 5*.”

It sounds like the book is rife with puns and wordplay, often involving the author’s native German, which may be great, groan-worthy, or both. For example, puns “which relate to body types/preferences: canaries/canines; butch putsch; ducks and dykes; significant otters; bears, ursine, and Ursula; PET plastics and pets.”

There’s plenty of absurdism here, for example bits on “odontogenesis, or tooth development” with a “radical dental practitioner”. One reviewer calls it “anarchic”, saying that: “Almost anything can become a protagonist (including clothing imprints and fibreglass animals).” There’s an appendix wherein one of the characters re-organizes parts of the narrative to their own liking!

It’s “a surreal comedy” but perhaps not actually as impenetrable as it may seem. And it really seems just super joyous when it comes to language. Or maybe not joyous but wryly playful, affectionate, dense and light at the same time…?

One fascinating thing I found via a review is that Waidner actually wrote her entire PhDthesis exploring the ideas in this book — “explaining her new idea of transliteracy, combining the avant-garde…and the notions of gender identity and fluidity…”

“Transliteracy” has a generic meaning, along the lines of “transmedia”, but the term means something more specific here: “a queer avant-garde writing method” acknowledging that all sorts of distinctions — between “form and content; authorship and process; subjectivity and objectivity” and more — “do not precede, but are being produced, enacted and stabilised within diverse experimental practices…”

She now teaches avant-garde writing and fiction; cultural studies and gender studies and queer studies; independent publishing; and more…and these research themes heavily inform her writing, or perhaps the other way around, in fact probably both!