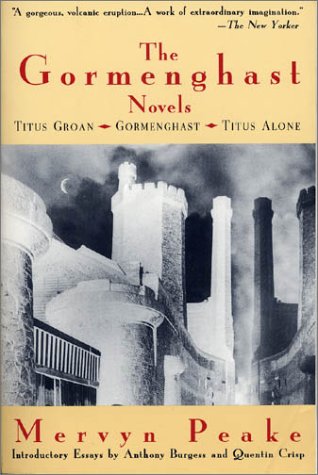 It’s been a while since I’ve read a full-on fantasy novel. I’ve read some science fiction lately (Dune!), but haven’t felt a deep, sustained immersion in a fantastical universe since Harry Potter, and the Redwall books before that.

This book—three books, really, an “accidental trilogy” (many further books were planned but only these were finished)—is a “gothic masterpiece” about a hero, a magical world, a great castle and kingdom, filled with fantastical creatures. It’s hailed as “one of the undisputed fantasy classics of all time”, which is surprising given that I hadn’t even heard of it until recently.

C. S. Lewis says that Peake’s novels “enlarge our conception of the range of possible experience”, which is always one of the important measures of a fantasy classic. Not only that, the language is “poetic” and weaves a “darkly humorous, stunningly complex tale”.

It is strange, surreal and grotesque; “irreducible to the sum of any of the influences we can find in it” (this is from the introduction). Characters have awesome, creative names. The language vivid and strange. The plot moves slowly; it’s more about the atmosphere and characters; the novels describe an “intricate, slow-moving world of ritual and stasis”.

This collection, which brings together the three novels, an unfinished fourth, and a collection of critical essays (and is illustrated to boot), seems intended to bring a bit of deserved luster back to an under-recognized classic.