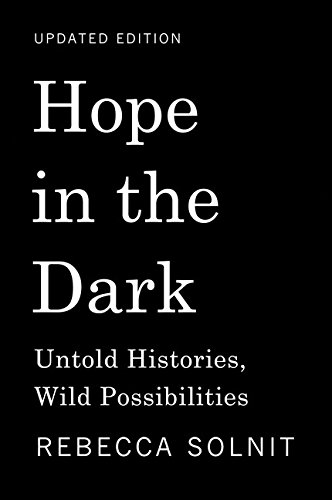 A small, salient book about hope. Solnit is an excellent writer, critic, essayist, commentator. She here argues that an “embrace of uncertainty” is more useful than “either passive optimism or pessimism and despair.”

This is a new edition; it was originally published in 2004 and written “against the tremendous despair at the height of the Bush administration’s powers”, fueled by a thesis that she believes still holds: that “[p]opular power has continued to be a profound force for change.” That we must amplify markers of social progress, large and small, the victories that resonate but often quietly.

Twenty-one essays, a few of them new, examine things like: false hope, the imagination of change, direct action, alternate history, alterations in time and in place, doubt. One particularly interesting sequence is five essays on the theme “The Millennium Arrives”, pinned to five different dates and pivotal events in history, politics, war: 1989, 1994, 1999, 2001, 2003.

Solnit “makes a radical case for hope as a commitment to act in a world whose future remains uncertain and unknowable…” She calls the book “one part of a vast, ongoing conversation about who we are, what powers we have, and what we can do with them…” Hers is a powerful voice, and I love the idea of “changing the imagination of change” at the root of these collected arguments.