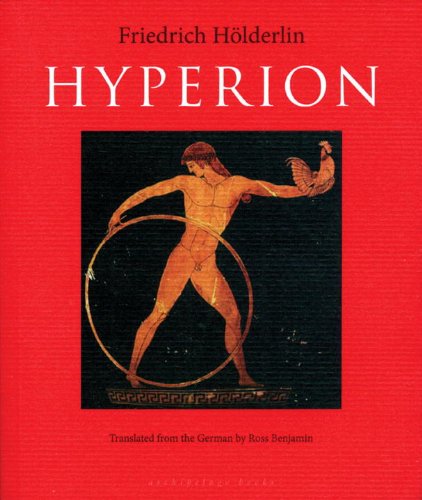 I’ll keep this short because I really don’t know much about this book, besides the fact that it’s an epic prose poem-novel. It’s a couple hundred pages long, written at the turn of the 19th century, a classic of German literature. The book is “a novel of stirring lyricism, philosophical sublimity, and enduring influence.”

The plot: a Greek hermit recounts his life’s phases. But the real power seems to be in the language. Hyperion “has been celebrated for its musicality, the power of its cadences and tones to express a constant oscillation between extremes of grief and joy.” He’s apparently one of the most significant German poets ever.

According to one reviewer — oh wait, I mean, according to Friedrich Nietzsche:  “In the euphonious movement of its prose, in the sublimity and beauty of the figures that appear in it, Hyperion makes an impression upon me similar to the beat of the waves of the troubled sea. Indeed, this prose is music, soft melting sounds interrupted by painful dissonances, finally expiring in dark, uncanny dirges.” I mean…that’s some high praise, right?

By the way, this is a very nice edition from Archipelago Books; I love their deckle-edged, square-format books. In fact, in general I love seeing how small press publishers create consistent and meticulously designed series of books! In some ways is may seem superficial — to what degree, ultimately, does the design of a text change its meaning and import? — but I think it’s an incredibly important element and often the deciding factor for whether I’ll pick a book up off the shelf, grow intrigued, and add it to my “look up later” list…or skim over it without a second thought.