The Image of the City 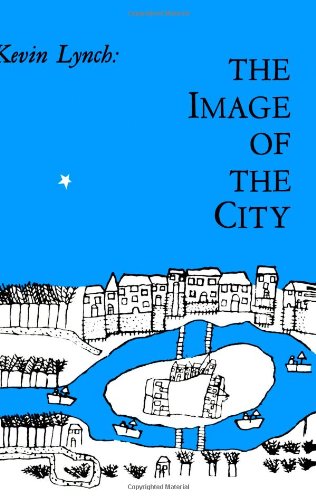 Saw this one at a used bookstore in Seattle…probably should have picked it up, but I’m accumulating books at a rapid enough rate that I like to at least take some time to research them first before the impulse buy (at least some of the time!) Anyway, this looks to be critically lauded and super interesting…

This book at least in part concerns the “psychology of urban designs”. Lynch attempts to answer questions like “What does the city’s form actually mean to the people who live there?” and “What can the city planner do to make the city’s image more vivid and memorable to the city dweller?” by examining the idea of “imageability”.

I like this term: “imageability”. I’m not yet entirely sure what that term means, but it’s got an interesting resonance. From what I gather, he explores the idea of mental maps as “composite images” of the city that reveal new dimensions of a place, hidden aspects of its character and constitution. There’s also a focus on the idea of “legibility”, which reminds me of the Ribbonfarm exploration of the term. Here, the “legibility” of the city means “the ease with which its parts can be recognized and can be organized into a coherent pattern.”

This is a short book — “a readable, tautly organized, authoritative volume…” Side note: I love it when books are clear and lucid and well-organized and don’t balloon to fill space unnecessarily.

Lynch talks about how city design is a “temporal art”; how cities are rich, deep in imagery and experience. This book considers the elements that form our cities and our perceptions of them; how the fragments accumulate into holistic experiences; how we shape and apprehend cities. He describes urban space as “a composition of nodes, landmarks, paths, edges and districts” that combine to determine our perception of urban space.

A lot of this forms some of the foundational ideas behind wayfinding! In fact I randomly happened to do a bit of research recently on wayfinding, and came across this book numerous times as reference. This seems really interesting in how it articulates the ways in which we relate to and organize space. It sits at the intersection of architecture and urbanism, aesthetics and design, sociology and psychology.

One reviewer emphasizes how this is a perspective-altering read: “Reading Kevin Lynch is like getting a new pair of glasses. Nothing has actually changed in your surroundings, but you see things differently.”