Networkologies: A Philosophy of Networks for a Hyperconnected Age — A Manifesto 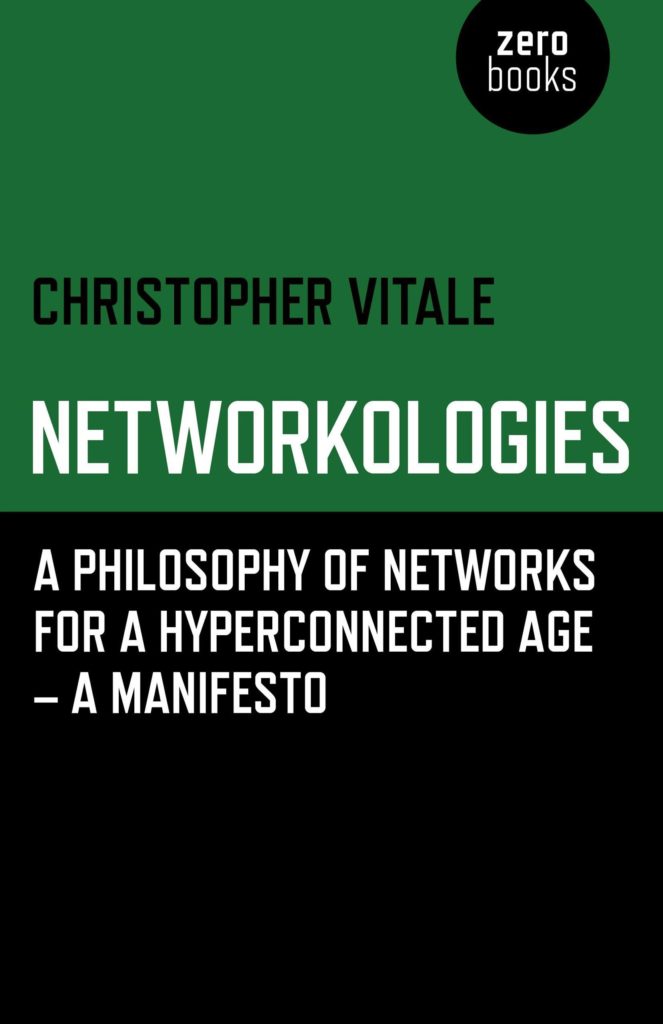 I glimpsed this title in a bookstore and didn’t get a chance to look through it but noted it for a later search, and it seems pretty new and lacking in reviews so I’m mostly going off my trusty Table of Contents & preview perusal! This is, apparently, “the first text to develop an entire new philosophy based upon networks.” Networks are becoming more and more ubiquitous and influential in how we experience the world, and this text “presents us with a new image of thought for our hyperconnected age.”

Vitale is a Professor of Media Studies at Pratt (holler, Brooklyn!) and he seems to have quite the interesting background: a residence at the Santa Fe Institute for Complex Systems Science, a couple years training to be a psychoanalytic psychotherapist, “extensive field research on the relations between the philosophy of networks and Buddhist philosophy” — sounds like the kind of guy I’d want to attend my next Idea Exchange!

Anyway, given his background I’m not surprised that this work seems to be excitingly interdisciplinary and full of cool material. It is “solidly grounded in the latest science, but it is also a powerful work of speculative philosophy. It gives us both a vision of what we are, and intimations of what we might become.” Cool, right?

The book is divided into two parts, the first of which comprises chapters like: Living in a Networked Age; Building on the Science and Mathematics of Networks; Complexity, Emergence, and Robustness; Network Dynamics; Networkological Description; Network Economies; and Evolving Robustness. It begins with with definitions, exploration, implications…models for networks, elements of networks, and their undergirding dynamics and philosophies.

Wouldn’t you know it — lots of stuff about networks! However there’s also a very intriguing “Part Two” called “Networkologies: A Manifesto”, apparently organized in a series of “nodes”, the list of which is so interesting that I’ll just reproduce it here in its entirety:

So, due to the limitations of Look Inside…I can’t actually see what form this second half takes! It intrigues me, but I’ll have to actually pick up the book to explore further…

I’m impressed with the aim of describing a sort of networked worldview; this book appears to take our connected world as premise, and from there explore its surprising layers of complexity, machinations, rules, behaviors, and rhythms. In some sense, its concern (and aspiration) involves illuminating how we make sense of everything! No doubt a Sisyphean task, endless, impossible — but always worth a try.