The Power Broker: Robert Moses and the Fall of New York

By Robert A. Caro 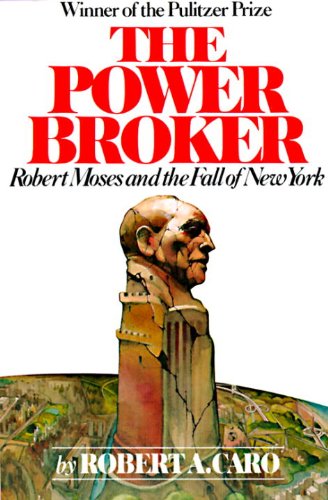 I don’t know much about Robert Moses, but I do know that Robert Caro is regarded as one of the preeminent biographers of our time — perhaps of all time — and this book is one monumental, complex, enthralling study of character and history.

The Power Broker is a Pulitzer Prize-winning classic that “tells the hidden story behind the shaping (and mis-shaping) of twentieth-century New York”. It is “a masterpiece of American reporting” and “surely the greatest book every written about a city.” It is “Irresistible reading…like one of the great Russian novels” and “a milestone in literary and publishing history.” Jane Jacobs called it not only a great read but “an immense public service.”

Robert Moses, the subject of this immense work, wielded incredible power in ways both impressive and problematic; his story seems almost unbelievable! On the one hand, it’s interesting to me because it deals with the transformation of a city — the urban development of Jane Jacobs-era New York, which has really interesting ramifications for the evolution of modern urban planning writ large (also, I currently live in New York!) There’s a map at the beginning that shows all the roads, parks, housing, landmarks and other developments touched by Robert Moses’ hand, and it’s pretty incredible: dozens of parks and housing projects; Atlantic Ave. and the BQE; Lincoln Center and Shea Stadium… Moses impact on nearly all areas and aspects of the city endures.

And on the other hand, I’ve never read this sort of incredibly in-depth and meticulously researched biography. I’ve read a couple superb autobiographies (Ben Franklin, Malcolm X) but this really is a different beast, the product of absurdly detailed and meticulous research. Hell, Caro has spend decades researching and writing a multi-volume biography of Lyndon B. Johnson; I’d love to read that someday too, but it’s a projected five volumes (he’s finished four so far). I think the 1100+ pages of The Power Broker will be a good place to start. Though it may be one for the Kindle!