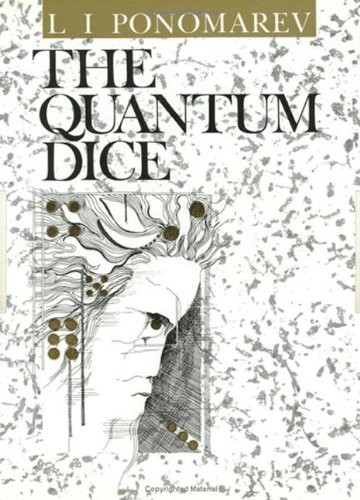 I stumbled across this strange, amazing book with its amazing, strange cover in an awesome used bookstore in Austin, but it was priced at something like $50 and I didn’t know if it was worth it. On Amazon, though, a new copy goes for an absurd $231, so maybe I should have sprung for it!

The book is about quantum mechanics, sure — but it’s also written and organized in a weird sort of arcane and engrossing poetic style. Chapters have mostly normal titles (Atoms, Waves, Quanta, Ions, Photons, etc.) — but also each one has a section called “Quantumalia” containing what seem like various related diversions or sidebars.

It’s broken into four sections: Origins, Ideas, Results, and Reflections. Each one is inexplicably accompanied, in the Table of Contents, by a strange black and white mythic-animal sort of illustration that on the surface has nothing to do with quantum mechanics! It seems very literary, with chapters prefaced by e.g. Edgar Allan Poe quotes; there are also more cool illustrations throughout, making it seem playful and advanced at the same time.

The author is a physicist, and here he “gives a fascinating account of the evolution of the ideas and concepts of quantum theory and modern physics.” It’s about language, structure, knowledge; thinking about quantum mechanics as a language seems a really interesting and cool way to approach teaching it. I love the whimsical style here, and this seems like an interesting and accessible intro to QM.