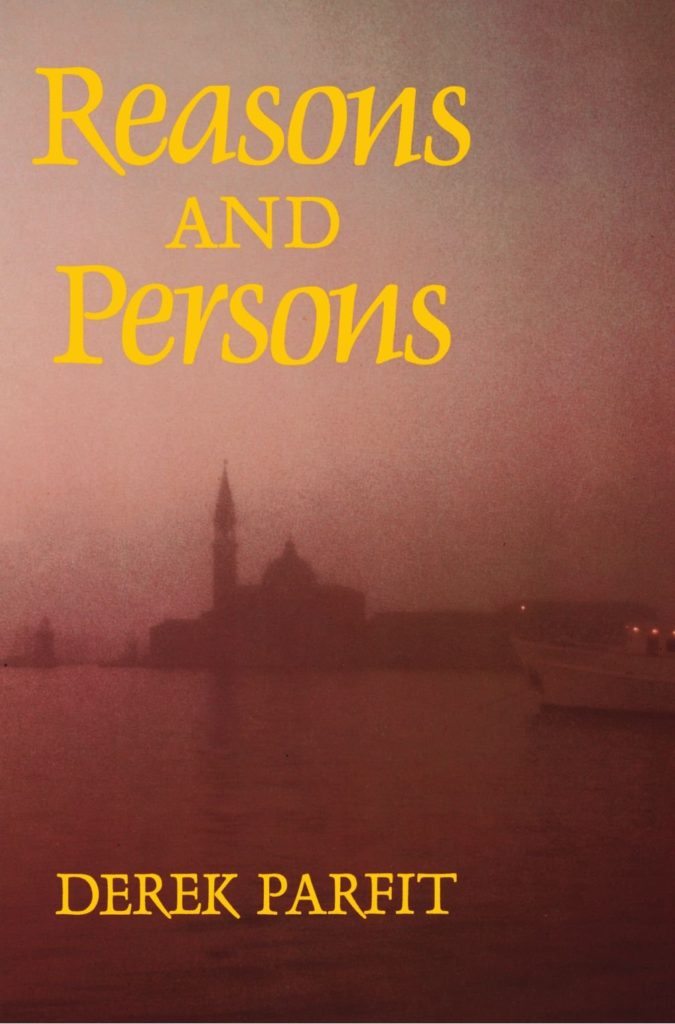 A philosophy book that challenges “some of our deepest beliefs about rationality, morality, and personal identity.” Also, a book that may not have caught my eye were it not for its striking cover!

I enjoy thinking about philosophy, but I don’t usually find myself drawn to philosophy books. Probably because they often seem overwhelmingly boring and pedantic. But here’s one that seems quite fascinating. It’s hard for me to decipher exactly what the book’s about, so I’ll start with some critical appraisals and dive in from there.

First off, people call this book “complex, brilliant, and entertaining”, “extraordinary…astonishingly rich in ideas”, “imaginative…strange and excitingly intense”, “massively important”, and “the philosophical equivalent of a neutron bomb”. It seems to be a fairly major work of philosophy, and a virtuosic showing within the field.

Okay, but what’s it about? One reviewer says: “Parfit shows how some of our most common-sensical beliefs about self-interest, ethics, personal identity, and (perhaps most interestingly) our obligations to future generations are beset with surprising and thorny problems, or even flatly self-contradictory or incoherent.” It’s made up of four parts: “self-defeating” moral theories, the relationship between rationality and time (past and future), personal identity and morality, and the role future generations should play in our moral deliberations.

Now, will I ever actually read it? Mixed feelings here: on the one hand, I see comments like “This isn’t an easy book either to read or to review…” and that it’s hard to tackle without training in philosophy. But others say “the prose is very smooth…an accessible read for most people” and “it covers a lot of ground, but it isn’t bogged down with a lot of jargon.” Still, it’s 500+ pages long and fairly technical, so…maybe.

Coming back to the title—and as Parfit reiterates in the introduction—the book is really about two subjects: reasons and persons. Beliefs and identity, and how they’re constructed. I’m interested in how philosophers draw complex conclusions from simple premises, and this promises not to disappoint. One cool thing: Parfit “separated [his] arguments into 154 parts, and [gave] each part a descriptive title”. Not sure if this is standard for the genre, but seems an interesting organizational strategy! Finally, he distinguishes between “descriptive” and “revisionary” philosophy. This book is the latter: Parfit wants to challenge our beliefs—and when wrong, change them.