Surfaces and Essences: Analogy as the Fuel and Fire of Thinking

By Douglas Hofstadter and Emmanuel Sander 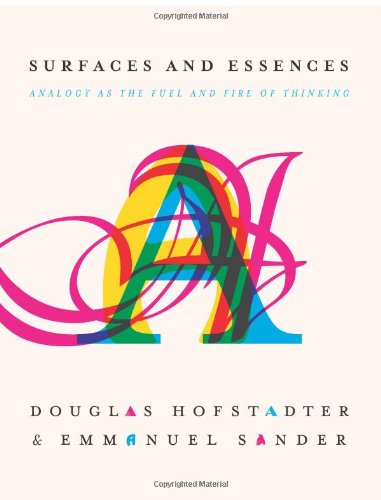 So, this is a book about the power of analogy in thinking. This is kind of Hofstadter’s bread and butter, and it sounds all too simple when I put it like that, but when you start to dig in the ideas seem pretty wild and awesome.

The core of the book, as I understand it, is that all the processing that goes in in the brain, responding to stimuli, making connections, etc.—all that activity coalesces around the triggering of analogies that help us make sense of everything. Building off Hofstadter’s earlier work (no idea about Sander’s) it provides a wealth of insight about the mechanisms of thought.

A lot of the examples in the intro blurb seem to be anecdotal and, though interesting, they don’t really get at the main question I have, which is “okay, clearly analogies play an important role in cognition, but why should we believe they’re paramount, that they dictate all the mechanisms thought?” The latter is what they propose, and if this book answers that question, it’s bound to be endlessly fascinating.

I’ve read most of Hofstadter’s Le Ton Beau de Marot, and part of Gödel, Escher, Bach, and know him to be brilliant and entertaining and remarkably inquisitive and a clear thinking. Unfortunately, judging from this book’s Amazon reviews (50 of them, not just a handful) its reception has been mixed. Many prominent scientists and researchers seem to love it; Steven Pinker calls it a “magnum opus…a milestone in our understanding of human thought, filled with insights and new ideas”. But others aren’t so satisfied.

One reviewer calls it “easy to put down”, and while I’m wouldn’t say this is always a great measure of a book’s merit, he goes on to level a more major criticism: “the book is entirely horizontal, without also being linear. It does not build. It doesn’t grow. It just keeps spreading outward.” Basically, there’s not much payoff. It seems some reviewers also doubt the strength of the main thesis; one lists potential counterexamples (or at least things that weren’t adequately addressed in the book): “metacognition…musical thinking, spatial thinking, proprioception, [and] perception…”

Is Surfaces and Essences a “witty and profound masterpiece” or “like biting an apple and finding half a worm”? Unfortunately the book—like all Hofstadter’s, it seems—is quite long, so I’m not sure I’ll really want to make the time to read it and find out for myself. I’m sure it’s quite entertaining and engaging, and I often enjoy Hofstadter’s meandering exploratory style, but I want to finish reading his other, more highly-regarded works first! But I imagine even if not as good as a book like Le Ton Beau de Marot, this will be a fun ride, delving into many interesting subjects and applications of analogy in unexpected places. I may have to come back to this, and tackle it, as one person recommended, “with a bit of skimming”.