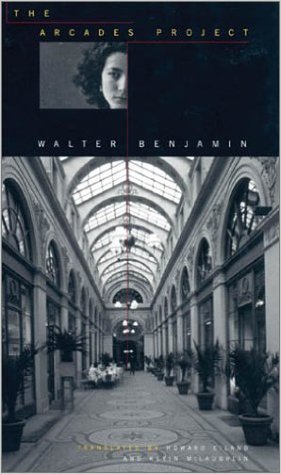 Walter Benjamin’s Arcades Project is a grandiose mega-project that reverberates even as it remains incomplete. It represents massive creative ambition: an encyclopedic catalogue of culture and urban experience in 19th century Paris.

Written over thirteen years in the 1920s and ‘30s, this is Benjamin’s “effort to represent and to critique the bourgeois experience of nineteenth-century history and, in doing so, to liberate the suppressed ‘true history’ that underlay the ideological mask.”

Called “a miracle of scholarship”, “a heroic achievement”, and “the greatest epic poem” of the twentieth century, The Arcades Project is a testament to observation; it “suggests a new way of writing about a civilization…history from below rather than from above.”

It’s a “magic encyclopedia” made up of hundreds of texts and passages, across 36 alphabetical sections such as Fashion, Catacombs, Boredom, The Collector, Jung, Dream House, The Flâneur, Mirrors, Marx, Photography, Hugo, Idleness. Two typefaces denote two different types of passage: reflections and citations; the two combine in a sort of relational montage of “secret affinities”.

This edition is also a landmark work of scholarship and translation. The volume is over 1,000 pages: around 800 pages of Benjamin’s main text (“Convolutes”) plus numerous other sections that capture some of the process, the immensity of the project unfolding.