The Golden Notebook: A Novel 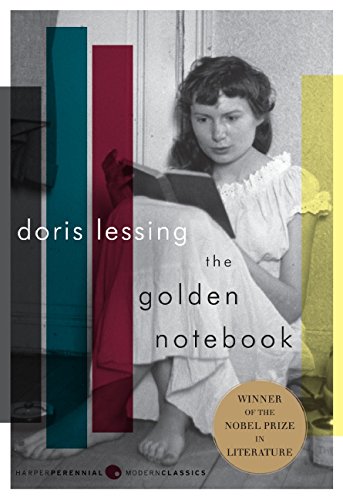 The original structure is what first caught my eye: “a short conventional novel, which can stand by itself, is interleaved with notebooks, diaries, comments about what went into it, in itself reflecting what many writers feel on finishing a novel: despair that their neat pattern of a novel excludes so much of the life that made it.”

This is a “feminist bible” — though, as Lessing says, not intentionally so — and is her “best-known and most influential novel…” I’m not familiar with any of her other work, but she’s a Nobel winner and an impressively prolific writer. Judging from their short synopses, many of her books look quite good (for example The Clefts, Mara and Dann, and Martha Quest).

The Golden Notebook is about a writer who keeps four notebooks, black, red, yellow, and blue. These represent, respectively, reflections on her earlier years, her political life, a novel, and a personal diary. As the story progresses, she resolves to bring them all together in grand summation, with the titular golden notebook.

I’m intrigued by the book’s promises of such themes as breaking down and building up; merging; creativity and subjectivity. The other thing I’m drawn to about this book is its interesting shape.

As described in Lessing’s great introduction, the book is defined by both the “skeleton, or frame” of its short novel-within-a-novel called “Free Women”, and the notebooks that compartmentalize various facets of the protagonist’s life and, in their synthesis, ultimately generate something greater.