The Politics of Education 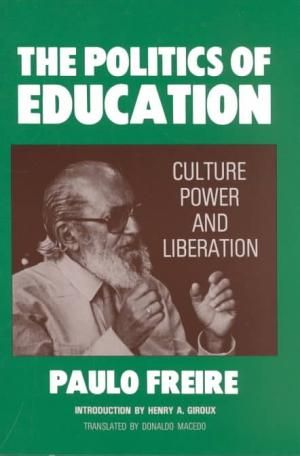 A collection of essays by iconic radical educator Paolo Freire, this book presents “a view of pedagogy and praxis that is partisan to its core” — a “radical critical theory” of action and change.

Freire presents “a new view of education and humanity that takes liberation, rather than mere instruction, as both its starting point and its goal.” Coming at a time where educational discourse is at an impasse, “steeped in the language of crisis and critique”, he presents alternatives, “emancipating ideas”.

The book covers a variety of topics — perhaps less unified than his most famous work, Pedagogy of the Oppressed, but touching on many interesting things, like: The Act of Study, Adult Literacy, Cultural Action, Political Literacy, and Humanistic Education. It also includes dialogues with Freire himself.

The first chapter, “The Act of Study”, seems short and fascinating. The book is dense but readable; concise essays and clear sections; just 200 pages total. It seems challenging to the reader, but in a good way. It may be out of print; at least, my used copy was pricier than expected.

Part of a “new sociology of education” emerging in England and the US in the 1970s, Freire’s work probes questions about “knowledge, power, and domination”, and in general seems like one of the first serious and sustained attempts to marry theories of pedagogy with those of social change, expanding the context of educational thinking in important ways.