The Timeless Way of Building 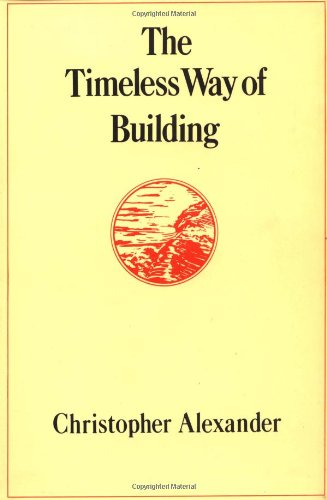 I have Alexander’s The Pattern Language; I’ve only read the first forty pages or so (of that thousand-plus page book…so barely the introduction) but enough to know I like the way he thinks. He takes a broad multidisciplinary approach on architecture and urban design, and in fact his four volume series The Nature of Order is an even more mammoth item in my Antilibrary.

He proposes a “theory of architecture, building, and planning which has at its core that age-old process by which the people of a society have always pulled the order of their world from their own being.” Apparently this is quite a perspective-altering work; his main idea “applies to almost every aspect of life” — the theme of discovering simple solutions to organize our complex world clearly extends well beyond architecture. One person said some of these ideas “inspired Object Oriented Programming” and apparently the idea of software “design patterns” stems from this work — if that’s true it’s an impressive achievement indeed.

This book is actually the predecessor to The Pattern Language; it’s “first in a series of books which describe an entirely new attitude to architecture and planning.” This book also talks a lot about the idea of patterns — of events and of space, of life and of languages — but in a more introductory theoretical way, it seems, while The Pattern Language itself is more of a practical guide through the specific design “patterns” he envisions based on these ideas. (There’s a third book in this series, The Oregon Experiment, that shows how these ideas/patterns apply to a specific architectural project.)

“Patterns”, at the core of his proposal, are ways to “solve a specific problem, by bringing two conflicting forces into balance.” One example of this would be the focal point created by the orientation of windows and furniture in a room. It seems to be all about making sense of complexity, decomposing complicated structures and relationships to clarify the relationships of their parts. It’s poetic in both ideas and language; in parts it can be somewhat imprecise, but perhaps inescapably so.

Final note: Alexander proposes an interesting alternative way of reading it; apparently you can go through and read the italicized sections for an abbreviated overview. I haven’t really seen that explicitly multi-layered structure before but it seems like it could be useful!